Menu
back to Articles....

Equine Gastric Ulcer Syndrome (EGUS) is a term that covers the damage and ulceration of the stomach lining in the horse. EGUS is a very prevalent disease affecting horses. EGUS is found in up to 90% of all race horses and endurance horses. The incidence of EGUS in sporthorses can also be as high as 60%.

The Stomach and Digestion Process

The stomach is small relative to the size of the digestive tract of the horse and has a small role in the digestion process to help further liquefy food particles as they pass through to the small intestine.

The horse is unique in that it continuously secretes hydrochloric acid to break down food particles.  It also produces the enzyme pepsin that helps break down proteins.  It is these gastric acids that ultimately damage the non-glandular region of the stomach as this area has thin, smooth walls which are not protected by glands as found in the glandular region of the stomach.
The time it takes for feeds to be digested in the stomach varies with the type of feed, forage or grain and the size of the meal.  Grain can take as little as ten minutes to pass through the stomach and forage can take up to 24 hours so the stomach has little time to empty and hydrochloric acid is being used to break down food particles.

To address EGUS, our aim is to neutralise the stomach acid and the horse has its own neutralising agent bicarbonate which is produced in its saliva.  As a horse chews it produces saliva the more time it chews the greater the amount of saliva thus bicarbonate produced. The bicarbonate then reacts with to neutralize the gastric acids.

It is important that all stable staff know the horses that are in their care so they are able to determine when there has been a change in their behaviour, eating habits, weight loss etc which could well mean the early detection of EGUS.

The following are clinical signs that different studies have found can indicate EGUS.

The only way to absolutely diagnose EGUS is by gastroscopy which is a long endoscope with a light and camera that is passed into the stomach via nostril and eosphogus to identify any ulcerations or damage to the stomach lining.

If you require a PDF version of this fact sheet please click here and we will send one to you.

Want to know more?
Contact us by filling in the form

Take a peek at some of our Quality Products

Subscribe to our Newsletter and stay up to date with our latest news, product updates, competitions and our promotions! 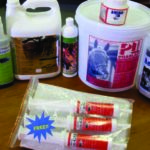